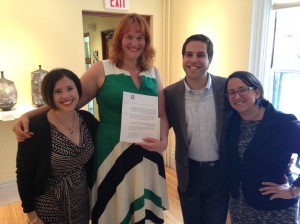 We share in joy with Leah Sawyer as we welcome her officially to the Jewish community! Today, Leah met with a beit din and immersed in the mikveh to complete her conversion process.

At services this evening, Leah will stand before our community as she recites Sh’ma holding onto our sacred Torah for the first time. We will also bestow upon her a Hebrew name.

What a milestone! In preparation for this day, Leah prepared a reflection on her Jewish journey:

Today I am choosing to become Jewish.  This is an important step for me – seven steps, actually, into the mikveh waters as a Gentile and seven steps back out as a new Jew – and a decision I do not take lightly.  After nearly two decades of thinking about the idea, and after 15 months of serious study and reflection, I am ready to become officially what I have come to feel inside, and to what I have been drawn for most of my life.

The question of “why Judaism?” is a hard one to answer – not because of a lack of compelling reasons, but because much of my motivation comes from somewhere deeper than logic.  Judaism just feels like the right fit for me, in an elemental way that defies description.

Growing up in a loving Irish Catholic family, my parents instilled strong values that included doing the right thing even at personal cost, prioritizing family and community, and the importance of kindness and generosity.  As I have grown in my life’s path, many of the specific tenets I believe in have changed, but those core values continue to guide me.  In Judaism, I find deep resonance with those values, and with new ones I have come to hold dear – inclusiveness, healing the world, feminism, and lifelong learning.  I still have many questions and expect I always will — in Judaism, I have found a structure in which I can wrestle with thorny topics and learn from others who are doing the same.  Most importantly, I have found an oasis of peace and calm in my life, a space of time in which I can recharge, and at the same time be challenged to be better and kinder.

My Jewish journey started in middle school, when I first read Chaim Potok’s The Chosen (and in short order, all of Potok’s other books) that gave me a window into a new world, and when our Christian Bible teacher Dr. D taught us ancient Israelite history and a smattering of basic Hebrew.  In college, as my once-ardent Catholic faith faltered, Dr. D’s statement that “next to Mandarin, Hebrew is the hardest language” was a spur to find a Hebrew tutor (difficult in deep rural Virginia) who introduced the aleph-bet, and to find a scholarship to study in Israel.

My six months in Israel taught me many things – that there are many kinds of hummus and they’re all delicious, Hebrew really IS incredibly difficult to learn, never to trust that an Israeli-organized “short easy” hike will be either short or easy, and that Israel is a deeply difficult and deeply beguiling country – but not so much about the actual religion of Judaism.  I learned that (at that time) most Israelis were culturally but not spiritually Jewish.

It was not until 2013, after a difficult period caused me to reexamine my life in many ways, that I began to think about Judaism more seriously.  At the time I was living with a roommate who had converted to Catholicism and taught high school theology.  Theological conversations with Andrea over red wine and pad Thai started me thinking again, after a long time of being closed spiritually.  I knew I couldn’t convert to Judaism, even with its lifelong pull, for a number of reasons… though in the end, none of those reasons stood up to debate or research.  I read Anita Diamante’s book Choosing A Jewish Life, my heart racing with excitement, and decided that this sounded right for me – I needed to know more.

After I contacted the Union of Reform Judaism and signed up for an intro to Judaism course, I started attending the local synagogue, Beth El Hebrew in Alexandria Virginia.  People were welcoming, but I struggled with feeling out-of-place, not knowing the melodies, and barely being able to sound out the Hebrew in the prayer book.  I kept coming every week and found a Hebrew tutor, and over several months I learned the melodies and came to feel less out-of-place, although I was still one of the youngest adults in the synagogue by several decades.

Following a sudden move to Boston for a new job, I was referred to Rabbi Neil Hirsch at Temple Shalom of Newton, who enthusiastically volunteered to shepherd me through the conversion process.  My first experience of Temple Shalom was Yom Kippur, which turned out to be hauntingly beautiful and meaningful in a way I hadn’t expected, as I reflected on the ways I wanted to change my life and myself in the coming year.  The evening Yom Kippur service was followed by a 20s and 30s break fast feast, where I met people my age, many of whom I have come to know well in the interim.

Since then, it’s been a whirlwind year of growth and learning — I’ve lit Shabbat candles in my home, attended services at Temple Shalom and Temple Beth Elohim of Wellesley, studied Torah on Shabbat mornings (especially savoring the footnotes in the women’s commentary Torah), studied Hebrew prayers (thanks to Liz Piper-Goldberg), burned “Thanksgivvukah” mashed potato latkes, taken the introduction to Judaism course in Wayland (thanks to Rabbis Neal Gold, Jen Gubitz, and Alana Alpert, among others), learned about the conversion process at Mayyim Hayyim (thanks to Rabbi Julie Zupan), and participated in the 10-week young adult Eser study class.  Most importantly, I have met regularly with Rabbi Hirsch, whose calm kindness and insightful analysis of complex issues I came to value, as we discussed my evolving thoughts and questions about Judaism, until I felt that I was ready to be adopted into Judaism.

The Mishkan T’filah prayerbook has many beautiful passages for reflection, including one that brings tears to my eyes every time we read or sing it:

Standing on the parted shore of history

We still believe what we were taught

Before ever we stood at Sinai’s foot;

That wherever we go, it is eternally Egypt

That there is a better place, a promised land;

That the winding way to that promise

Passes through the wilderness.

That there is no way to get from here to there

Except by joining hands, marching together.

Today I join a beautiful 4,000 year old tradition, one with built-in growth and deep complexity.  It’s where I belong, and I am honored to join hands and march together into a new future.