The Eternal God is my strength: God makes my feet like the deer’s, and lets me stride upon the Heights. – Habakuk 3:19

Coming up on this first anniversary of last year’s tragedy, coinciding with the 127th running of the Boston Marathon, we now know as a broad Boston community that we are strong and resilient, and that we are better together. These lessons do not need to have come out of the bombings, because they are what a runner learns when he or she goes out to complete a marathon. The exhaustive emotionality of a marathon is something anyone who has finished that distance knows in their bodies and in their hearts. I’ve personally been feeling an echo of that exhaustion over the last few weeks as various news outlets have been running remembrances as we approach this first anniversary. 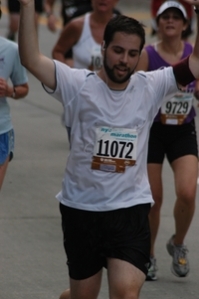 This year’s Marathon also coincides with the conclusion of Passover, our festival of liberation. With those two things coming together (and because I had to figure out an elaborate path to get to shul for services. Darn road closures), I’ve been wondering about what our tradition has to say about running and fitness.

Looking through the available texts on this, two stand out.

The first is a talmudic conversation between Rav Huna and Abaye. It was reported that Rav Huna noted that “One who leaves the synagogue should not take large strides because it creates the impression that he is eager to leave” (BT B’rakhot 6b). Don’t run from the synagogue, lest someone think you’re running from God. But what about running to the synagogue? “It is a mitzvah to run and one is permitted to rush and take large strides,” says Abaye, for “one who eagerly enters a synagogue displays his enthusiasm to follow the path of God” (ibid).

When we run from something, it is looks like fear. When we run toward something, it displays enthusiasm and spiritual adroitness. Running toward goals, objectives, destinations, toward that finish line at 26.2, can be a spiritual practice if it enriches of our lives, enriches our relationships with one another, and enriches our connection to the Divine.

Maimonides expressed this notion in his Shemonah Perakim, “Man needs to subordinate his soul’s powers to one goal, namely, spiritual perfection. He should direct all of his actions, both when at motion and when at rest, and all of his conversation toward this goal so that none of his actions are in any way frivolous… The purpose of his body’s health is that the soul finds its instruments healthy and sound in order that it can be directed toward spiritual growth.” All that sweat we let out at the gym, all of the training miles we put into our legs, all the nutritional awareness, the scheduling to make it to that-special-yoga-class, and the like–those things are not for washboard abs and a strong body alone. We take care of our bodies (read: fitness is critical) because it is a pathway to spiritual perfection.

We are better people in the here and now when we put fitness and health as one of the top things on our personal priority list.

I have, at times, found this hard to keep in my heart. So I keep a reminder on my desk. There, sitting in a simple frame is an old advertisement from a running shoe company. The tag line is “We know that 26.2 is the short part.” Around that are a series of photos, each documenting different steps runners take to train and prepare for marathons. Those are the tough moments in marathons, not race day, itself.

For twenty-ish weeks, runners have been preparing for today. For the past year, our city has been preparing for this first anniversary. And as we celebrate the close of our festival of liberation, let’s recognize just how critical it is that we continue to care for our own health and fitness.

It’s good for the spirit.